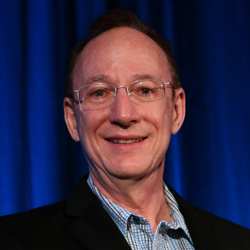 At Tuesday’s lunchtime Symposium X talk, Steve Granick discussed his efforts in a “large, vibrant, and growing community around the world” that studies the materials science and engineering of the living world.

Granick began by discussing contributions to our fundamental understanding of entropy and thermal energy principles in materials by Ludwig Boltzmann in the 19th century and John Cahn in the 20th century.

However, studying biological materials means the frameworks of classical thermodynamics and other tenets “simply do not apply.” For example, molecular machines—the topic of the 2016 Nobel Prize in Chemistry—show interesting and useful functions in a system that is out of equilibrium.

Comparing a Boeing 787 and a living cell in our bodies, Granick pointed out the number of people and time required to make and sustain the airplane, versus the self-sufficient and self-healing nature of our cells, which only require food to function. Given these orthogonal worldviews, can materials science and engineers legitimately address the function of biological systems, without having to become biologists themselves?

Using this philosophical question as a springboard, Granick discussed the promise of viewing “life as a material,” and how the rules of non-equilibrium materials can be unveiled in part and used to design or exert control over biological systems. The function of biological molecules depends on their activity in a system; the challenge is to construct systems that coexist orthogonally in space and time, do not interfere with one another, and are linked by consecutive reactions and feedback.

Describing his work on colloids, which he called “spheres with chemical shapes,”

Granick discussed how to bring life to colloids. After coating silica particles with a very thin metal film on one hemisphere through evaporation or deposition, these particles are suspended in water in a test cell.

When AC current is passed through the cell, these particles will “stand up” in an alternating fashion. The metal-coated side is more readily polarized, which produces a “jet thrust” toward the dielectric side. What’s interesting about this process was the amount of activity of the particles, compared to what would be near-zero Brownian motion for micron-sized particles.

Granick’s group used this broken symmetry with two induced dipoles and manipulated the magnitudes of the dipoles associated with each colloid by varying the frequency of the applied electric field. Then with the same “parent” particles that look identical at rest, the team can create four different kinds of particles that can be tuned or controlled with an external input of energy.

When dipolar repulsion dominates, the particles pair briefly, like a swarm of birds, and are swept along with the flow. If two swarms begin at different locations with different directions, it looks like an ocean wave hitting the shore, with the collision areas as eddies that turn into vortices.

Working with Erik Luijten, an expert on computational soft matter at Northwestern University, two- and three-dimensional simulations were developed for the isotropic, chain, swarm, and cluster behaviors of these colloids.

Using another underlying tenet of materials science—the effect of temperature—Granick discussed how to make predictive models of phase separation and other “thermal” fluctuations in non-equilibrium materials. By making traffic lanes for the colloidal particles with magnetic fields, Granick and Luijten could simulate dynamic separation.

In this case, the “parent” particle has two degenerate configurations. By adjusting the magnetic field in the x-y plane, the particles will swing in circles, or orbits. When these orbits collide, there is an ensuing disorder that can be thought of as a “diffusion-like” behavior. Other familiar behaviors, such as spinodal or binodal decomposition, are also evident.

“In our field, sometimes there’s too much of a sense that we are harvesting what is known, and that the fundamental ideas are already there,” Granick said. “I would disagree—there are many surprises in soft matter and living matter to come, and we are at the beginning of a new era.”