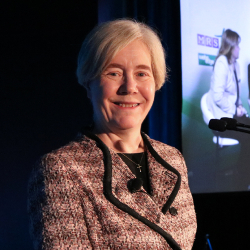 Monday’s Plenary Session featured the Fred Kavli Distinguished Lectureship in Materials Science, presented by Ellen D. Williams, Director of the Advanced Research Projects Agency–Energy (ARPA-E), a part of the US Department of Energy since its creation by Congress in 2007. Williams set the scene for her presentation with a quick review of energy consumption in the United States since 1850 when an almost entirely wood-based technology was producing just a few quadrillion BTU/year. She noted that today’s broad mix of energy sources, dominated by fossil fuels but with a growing renewable energy component, collectively generates almost 100 quadrillion BTU/yr (quads). The energy growth has been accompanied by a rise in atmospheric carbon dioxide. From about 290 ppm before the industrial revolution, we have already jumped to 400 ppm, and climate scientists say we have to stabilize the level at 450 ppm or less by the end of the century to avoid the most drastic effects.

Against this backdrop, Williams portrayed a triple-thrust mission for the agency comprising innovation characterized by revolutionary, cutting edge, high-risk inventions, energy applications that reduce energy-related emissions, reduce energy imports, and improve energy efficiency, and advances with impact determined by a positive answer to the question: If it works, will it matter? She sprinkled her presentation with many success stories. As an example of innovation, she described a flying wind turbine that circles at a height of 500 feet to 1000 feet where adequate winds blow over 85% of the US land area, as opposed to only about 15% at ground level. After a successful demonstration flight, Google X bought the technology and is now working on a 600-kW prototype.

ARPA-E’s program portfolio is based on four energy sectors: electricity generation, electrical grid and storage, efficiency and emissions, and transportation and storage. Approved projects typically receive funding for three years totaling around $30 million. The agency has developed a unique program management approach that closely couples technical milestones with commercialization milestones, in part by having both technical and commercialization leaders for each project. As with the flying wind turbine, successful projects can continue by finding private-sector investment. For example, Williams said that since ARPA-E began funding projects in 2009, it has invested in more than 475 projects. Of these, 45 projects have attracted more than $1.25 billion in private sector funding as of February 2016. Another 60 have continued development under other government programs, and 35 have resulted in the formation of new companies.

As an example of the agency’s motto of “changing what’s possible,” Williams cited the US electricity grid. Energy storage is just one aspect of the making the grid more efficient and secure, and low-cost batteries could have a transforming effect, particularly for long-term storage where large numbers of batteries are needed. Williams cited several technological approaches in the ARPA-E portfolio, such as flow batteries, that aim at meeting the cost-performance goals. As a second example, she described building efficiency. Of the 97 quads consumed in the United States, about 15 quads are used for HVAC in buildings, and of these, 2 quads are lost through single-pane windows. Williams cited several examples of approaches to finding coatings that allow windows to prevent heat from escaping while remaining optically transparent.

Williams completed her talk by expanding her view of the energy landscape from the United States to the rest of the world. Current International Energy Agency projections of energy consumption out to 2040 do not show a dramatic shift in energy technologies. Today’s mix, now producing 600 quads, will continue to generate more energy and more CO2, resulting in 800 ppm of CO2 in the atmosphere by the end of the century, far above the 450-ppm goal. But Williams argued that projections need not come true. It is possible, she said, to rebalance the energy mix to lower emissions and remain within the 450-ppm goal without a dramatic drop in energy consumption and without being economically disruptive, provided both technological innovations and appropriate policies are forthcoming. As a first step to participating in the ARPA-E mission, she closed by inviting listeners to stop by the ARPA-E booths at the iMatSci Showcase during the meeting to see some success stories.