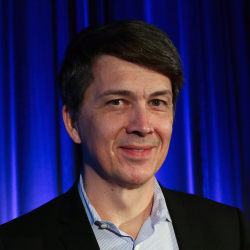 The Prediction of Stable and Metastable Compounds

Gerbrand Ceder opened his Materials Theory Award presentation with a rather ambitious goal for materials theory, saying that the ultimate goal of ab initio materials science is, starting with an arbitrary composition, first calculate (predict) the structure, then from the structure the material’s properties, and finally from the properties its applications, what he called a complete design suite. For this evening, however, he confined his comments to the first but still extremely challenging step of obtaining structures from compositions, including both stable and metastable phases. Structure, as all materials scientists know, is the key to properties, as Ceder illustrated with a quick look at the various forms of carbon from graphite to diamond to graphene and their differing properties.

Ceder covered a lot of ground quickly, starting with the notion of structure prediction as an optimization problem, such as finding the lowest energy configuration (ground state). Techniques range from mathematical (e.g., simulated annealing), to guessing, to machine learning, all aiming at finding a global energy minimum when there may be many local minima. He described how to obtain exact solutions for the ground state with lattice models involving the distribution of items on a pre-defined set of sites, as in surface absorption, alloy ordering, and vacancy ordering. The approach, based on a variational principle, is to find the configuration for which the minimum upper bound for the energy coincides with the maximum lower bound for the energy. Finding the upper and lower bounds require different iterative techniques, both based on cluster expansions. Applied to LixTi(1-x)O2, these methods yielded the ground state structure along with several other novel structures not previously known.

Ceder examined the possibility that machines can learn to predict structures. For example, from crystal structures deposited in the Inorganic Crystal Structure Database, the computer is 90% effective in predicting structures in ternary systems, given known structures for as few as 18 compositions. Moreover, they can extract substitution rules for replacing one ion with and use the information to calculate a map showing the probability of maintaining the structure under ion substitution. With this background, the computer has “invented” a new lithium-phosphate compound (Li9V3(P2O7)3(PO4)2) based on substituting vanadium for iron in Li9Fe3(P2O7)3(PO4)2 that when synthesized functioned well in a battery.

The situation is not so clear when it comes to metastable phases, which make up about half of all known compounds. For example, is energy a good criterion for what crystalline solids can be made? One study of binary oxides indicated that most phases had energies within 100 meV of the ground states, a conclusion confirmed, except for nitrides, across several chemistries, including phosphides, sulfides, chlorides, oxides, and fluorides. A look at two kinds of metastability (polymorphism and phase separation) showed that polymorphism has a lower energy scale than phase separation metastability. Moreover, the energy scale of polymorphism decreases when the number of components increases, as does the percentage of polymorphic metastable phases. Finally, among the many hypothetical low-energy polymorphs of well-studied compounds, many had never been observed, suggesting that low energy was a necessary but not sufficient criterion for what could be made.

Looking beyond energy alone, Ceder looked for a guiding principle in “remnant metastability,” the idea that metastable phases made under thermodynamic conditions where they were stable are retained in conditions where they are metastable. Ceder concentrated on the particle size, which can change the relative stability of polymorphs via the surface energy, in compounds existing in two phases - ground state and polymorph: TiO2 (anatase and rutile), FeS2 (pyrite and marcasite), and CaCO3 (calcite and aragonite). In the first case, the metastable rutile has a lower nucleation barrier and lower free-energy at small particle sizes than anatase, so it forms first and may (or not) persist at higher particle sizes. Particle size plays important roles in the other two systems, suggesting its importance in nucleation of metastable phases.

Ceder closed with a mention of the possibility that computers can learn synthesis recipes from the literature, referring listeners to a Tuesday night poster paper.

The Materials Theory Award, endowed by Toh-Ming Lu and Gwo-Ching Wang, recognizes exceptional advances made by materials theory to the fundamental understanding of the structure and behavior of materials. Gerbrand Ceder is being honored “for seminal contributions to the emerging field of computationally guided materials exploiting high-throughput computation and promoting the development of open databases to enable widespread use.”