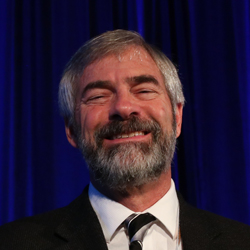 A Holistic View of Nucleation and Self-Assembly

For his David Turnbull Lectureship award talk, James De Yoreo began with an historical perspective, discussing J.W. Gibbs’ classical theory of nucleation. Although Gibbs’ intention was to understand the formation of raindrops, the principles could be applied directly to crystal growth. Gibbs’ theory suggests nucleation requires “going uphill” in free energy, which means nucleation is the result of unstable density fluctuations.

However, since the 1990s, there has been growing evidence that many systems do not go through the classical nucleation process. “So what’s wrong with the classical pathway to nucleation?” asked De Yoreo. It turns out there are four hierarchical “non-classical” pathways to nucleation: complex speciation pathways, polynuclear cluster aggregation, size-driven precursor, and dense liquid precursor.

These pathways arise from complexities in the free energy landscape. Apart from configurations that result from a bulk phase diagram, there are unstable phases that can exist as thermodynamic fluctuations in the system, and result in many clusters of a specific metastable structure that then dominate the pathway to nucleation.

Dynamic or kinetic restraints may also play a role; for example, increasing the supersaturation or reducing the mobility of a particle could influence nucleation.

For the rest of his talk, De Yoreo detailed systems that exhibit these complex nucleation pathways driven by thermodynamic or kinetic reasons. For calcium carbonate, there are four phases—calcite, vaterite, aragonite, and an amorphous “phase.” However, predicting what phase will nucleate is “like rolling the dice.”

In situ transmission electron microscope experiments in De Yoreo’s laboratory document both multiple pathways and two-step nucleation, suggesting multiple pathways of nucleation are open to the system across a wide range of supersaturation conditions.

For calcium carbonate on a self-assembled monolayer, the introduction of a low-energy interface encourages classical behavior, as the substrate chemistry can impact both nucleation rate and the pathway for mineral formation.

In another scenario investigating the effects of reducing mobility in a calcium carbonate system, the introduction of a cation-binding polymer freezes the system in a non-equilibrium state. Here, adding a highly charged polymer (polystyrene sulfonate) that binds calcium creates amorphous “globules” that are primed for nucleation in solution. If the polymer is absent, the system forms the vaterite phase, suggesting that although nucleation only occurs in the globules, the polymer inhibits nucleation yet also inhibits transformation to the crystallized phase due to reduced mobility.

De Yoreo then discussed the formation of metastable phases, which “represent an opportunity—if you can isolate such a phase, you might have a useful function not available in the equilibrium structure.” Sequence-defined polymers called peptoids (Pep-1) can provide a probe of structural controls along the pathway selection. Alone, Pep-1 leads to traditional crystallization. The addition of a hydrophobic tail to the peptoid (Pep-2) leads to hierarchical pathways with two-step nucleation.

Lastly, De Yoreo showed the assembly of collagen that like other complicated macromolecular structures, introduces a second-order parameter in the nucleation problem to produce confirmation. In this case, the kinetics of assembly depend on order—the more ordered the structure, the easier it is to add the next molecule. The need for conformational transformations leads to multi-stage assembly through kinetically trapped states.

“The bottom line is the energy landscape for small clusters is very complex, and predicting which one a system will follow is a very difficult task,” he said.

To conclude, De Yoreo highlighted four challenges for researchers to address: understanding the cluster size distribution prior to nucleation, determining what selects for speciation pathways in building complex lattices, incorporating chemical transformations into predictions of nucleation, and predicting and manipulating transient states.

The Turnbull Lectureship Award recognizes the career contribution of a scientist to fundamental understanding of the science of materials through experimental and/or theoretical research, as exemplified by David Turnbull. James De Yoreo is honored “for discoveries that have shaped our understanding of crystallization science.”