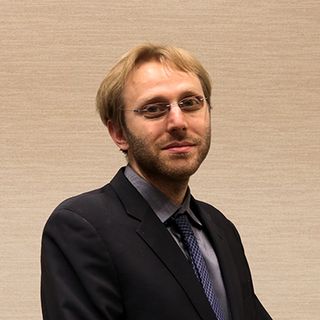 Using a technique called magnetic ratching cytometry, researchers can leverage structured ferromagnetic materials at the microscale to generate effects at the nanoscale. In particular, changing the pitch between arrays of micromagnets allows the researchers to sort cells in their equilibrium configuration by magnetic content. This separation based on relative expression level or relative volume is useful in applications such as detecting cancer cells.

The next strategy is using microfluidically-created particles that flow into a wound and anneal together to form a microstructured scaffold with porosity that allows tissue integration. This technique addresses the “foreign body response” caused by traditional implants that limits transport of nutrients and interferes with drug delivery.

To heal or augment function, Di Carlo says, the tissue must integrate seamlessly in situ. Using microporous annealed particle (MAP) gels, a slurry of particles is introduced into a wound or blood to vessel. These gels are then annealed to form a scaffold network connected to the surrounding tissue, with the negative “void space” creating porosity. This microstructured technique leads to accelerated healing of wounds.