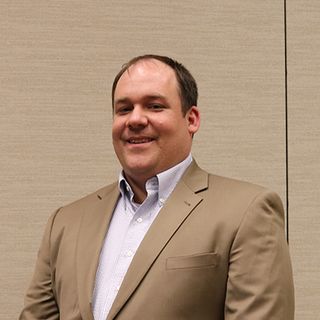 Displays for products like smart phones and televisions based on liquid crystals pervade modern society and accordingly are a $1 billion industry that includes the currently fashionable wearable electronics, but these applications by no means exhaust what is possible with liquid crystals. In his Outstanding Young Investigator Award talk, Tim White of the Air Force Research Laboratory (AFRL) noted that it has been long known that liquid-crystalline materials in polymeric forms also exhibit exceptional characteristics in applications like transparent armor or bulletproof vests, as well as in optics and photonics. For example, researchers at the Air Force Research Laboratory and elsewhere have been working on exploiting the anisotropic properties of liquid crystals for controlling mechanical properties with the eventual goal of functional devices, such as mechanical actuators, based on shapes or surfaces that adapt to external stimuli. Among the many types of liquid crystals, he concentrated on programmable thermotrophic liquid crystals in the calamitic class. He described three main elements of such materials: Monomers, liquid crystal alignment, and shape and topology. The monomers are rod-like with aliphatic chains at the ends and polar head groups. Traditionally alignment relative to the film’s confining surfaces was by mechanical means but the interest now is in photo-alignment. Shape determines functionality and shape changes introduce multi-functionality. Shape derives from patterns and is the result of introducing anisotropy into the mechanical properties of liquid-crystal films.

White distinguished between liquid-crystal polymers with no cross-linking between chains (e.g., Kevlar), glassy liquid-crystal polymer networks with extensive cross-linking and a limited shape response, and liquid-crystal elastomers with an intermediate level of cross-linking, owing to a low glass transition temperature, but exceptional shape change. For example, heat causes a phase change and increases the volume at the microscale; the local volume increase amplifies the mechanical response; and the mechanical properties change as a result, as in the change in the length of a wire, similar to the change in a muscle fiber. Orientation is a key factor. Stretching orthogonal to the orientation of the chains results in a linear behavior like rubber, but stretching in the direction of the chains introduces what White called “soft elasticity” in which there is a region with large strain at low stress, a feature useful for flexible devices. He then reviewed methods of preparing and aligning liquid-crystal elastomers and aligning them (mechanically by hanging a weight on them, magnetically, and optically by adding a photoactive group before cross-linking and illuminating). To locally program the elastomer, a technique White called blueprinting was adopted. A blue-light laser sequentially patterns the direction of orientation to create active or inactive spots100-µm in diameter as the sample is moved through the beam on a two-dimensional (2D) stage, a process that takes about 80 minutes. The next step was to impose a designed response to heating (or more generally, a stimulus) so that the patterning generated a useful result. One way to accomplish this is by means of topological defects. For example, the group demonstrated a 3 × 3 array in which, when heated through the nematic–isotropic transition, cones arose out of each element of the array capable of lifting a weight 700 times heavier than themselves about 5 mm, an achievement on the way to real actuation as it compares to human muscle. The same effect can be stimulated by light, a solvent, or electromechanically.

Exploiting “soft elasticity” in flexible hybrid electronics in the near term emphasizes combining flexible high-performance electronics like solar cells with printed electronics like interconnects, but the future looks toward innovative multi-material and multi-functional printing approaches to enable advanced capabilities such as reconfigurable antennas, embedded electronics, and “ruggedized” survivable electronics. Inspiration comes from Nature from wood grains to muscles and tendons and ligaments. The ACL, whose injury plagues athletes, is designed to be flexible vertically but more robust laterally. Much of the effort is toward integrating stretchability with ruggedness. To monitor the effect on local strain of global stretching, White’s group used a technique called 2D digital-image correlation to map strain in a variety of samples including the AFRL logo printed in a liquid-crystal elastomer film, where the letters were the soft regions. The relevance to flexible electronics was demonstrated in an experiment with a stretched metal-coated elastomer film comprising an elastic and a soft elastic region. The electrical resistance on stretching was unchanged in the elastic region but dramatically increased in the soft region. To close, White looked at a way to speed up the time to produce samples from 1-2 days to a minute or so. The more homogenous network properties associated with the new methods allowed more strain and a sharper transition, which permitted films with cones lifting up to 9 mm. To progress to actual functional devices will require collaboration with the mechanical design community, but the pattern programmability suggests a huge world of possibilities.