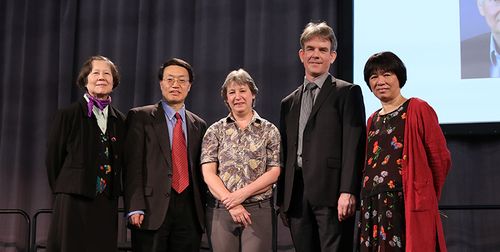 Transmission Electron Microscopy of Specimens and Processes in Liquid

Once, many of us automatically thought of electron microscopy as an ultrahigh-vacuum technique best limited to thin, solid samples, such as the elaborately prepared, thin sections of biological cells prepared for transmission electron microscopy (TEM). But, as Frances Ross noted in her introduction section of the Innovation in Materials Characterization Award presentation, from the beginning one goal has been to image liquid specimens and measure processes in liquids with good spatial and temporal resolution. As far back as the early 1940s, the two main approaches to handling liquid samples were already apparent in the form of thin-window (closed) cells and differentially-pumped (open) cells that maintained a low pressure near the electron beam, but both were difficult to use and neither improved the spatial resolution significantly over that of an optical microscope. Modern materials and fabrication have come to the rescue. Electron-transparent silicon-nitride windows capable of withstanding high pressures and ionic liquids with low vapor pressure and vacuum stability combined with micromanipulators to place nanosamples in contact with the ionic liquids make the two methods practical.

Ross continued her portion of the presentation by describing closed cells for TEM of electrochemical processes. She pointed out an important tradeoff in choosing the thickness: Thin windows provide the best resolution, since there is less liquid for the electrons to pass through, but real electrochemical processes often require somewhat thicker liquids, perhaps flowing as well, before they will occur. Radiation effects have to be considered as well, not only for any solids present, but for the liquid, which can be plagued by artifacts such as gas bubbles under radiation doses comparable to those in nuclear reactors. Electrochemical growth models apply to individual structures (nuclei, pits, dendrites) yet were developed based on ensemble measurements such as cluster density, average film thickness and current per unit area. Liquid-cell TEM combines good spatial and temporal resolution with measurement of electrochemical parameters, thus occupying an essential niche between light microscopy and scanning tunneling microscopy. Ross illustrated this capability with a series of studies starting with electrochemical nucleation and growth and continuing with instabilities in zinc-based batteries, pitting corrosion in aluminum films, galvanic displacement to create nanostructured catalytic surfaces, and electrical control of nanoparticle growth in solution. Ross closed by emphasizing the ability of TEM to provide quantitative data, the opportunity for advanced cell designs, and the possibility of drawing on high-speed, analytical, and aberration-corrected liquid-cell microscopy, as well as correlative microscopy involving electrons plus light or x-rays.

Niels de Jonge continued the presentation with a review of scanning transmission electron microscopy (STEM) of whole cells in liquids. The objective of the research is to study how cellular function is regulated by external signals received by membrane proteins. Membrane proteins (receptors), which lie in the cell membrane, interpret chemical signals from outside the cell and decide which action a cell should take. De Jonge illustrated the idea with the epidermal growth factor receptor (EGFR) to which epidermal growth factor, a signal for cell growth, can bind. A subsequent dimerization reaction completes the process. But this picture is obtained indirectly from biochemical techniques, as there has been no way to directly image the process: fluorescence microscopy has insufficient resolution, and electron microscopy has required thin, solid samples. For direct imaging in liquids, de Jonge and his colleagues developed a closed cell through which liquid could flow. To obtain contrast, they labeled the EGFR with gold nanoparticles. In this way, they were able to obtain images distinguishing monomers and dimers with 4-nm resolution. An alternative method applicable to the thin regions of the cell away from the nucleus is to use STEM detection in an environmental SEM (ESEM) at lower voltage. To find the regions of interest in the cell, light and electron microscopy were combined. This technique is being used to study HER2 in breast cancer cells. A member of the EGFR family, HER2 does not require an external signaling ligand and thus opens the way to uncontrolled cell growth, suggesting a possible link to the development of drug resistance.

Chongmin Wang completed the presentation with a discussion of the use of open cells for battery research. The main components of batteries (anode materials, cathode materials, electrolytes, and interfaces) all play important roles in battery operation and failure during the charging and discharging cycles. In lithium-ion batteries, for example, the standard graphite anode has a limited charge capacity, and researchers are looking for alternatives, such as silicon, to boost the capacity, in principle up to a factor of 10 or so. The difficulty is that the capacity of silicon anodes decreases as the number of charge–discharge cycles grows during service, owing to failure to accommodate the large volume change during each cycle. Wang’s group developed an open-cell design for in situ TEM of rechargeable lithium-ion batteries with the cathode attached to one gold rod, nanowires anodes to a second gold rod, an ionic liquid electrolyte between, and a bias applied across the sample and use it to study the possible benefits of coatings to mitigate capacity fading. One promising candidate is alucone, a metal–organic material, but how does it work? They found that the strength and thickness of the coating materials are critical parameters. For example, too strong a coating will lead to battery self-discharge. The ideal coating provides a deformable layer with weak resilience. Wang ended with a look at the advantages of open and closed cells. Both open and closed liquid cells can provide similar information on the intrinsic response of material to ion insertion and extraction, but the closed liquid cell is the only way to correlate electrochemical behavior, structure, and chemistry in real battery.