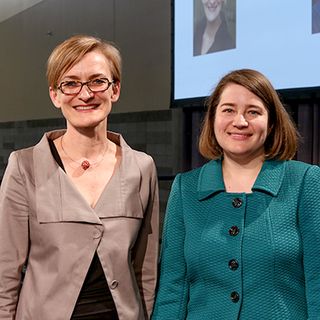 Music and Materials—Art and Science of Organ Pipe Metal

When one reflects on how musical sounds are made, basically blowing air through a pipe or plucking a string, it is hardly surprising that the materials of which the pipes, the strings, and their enclosures are made play a huge role in the nature and quality of the sound produced. In their Tuesday Symposium X presentation, Annette Richards (Cornell University) and Catherine Oertel (Oberlin College) elegantly and cogently explored this connection in the context of how researchers hope materials science can undo the ravages of time and the elements that have been degrading, and may even ultimately render mute, the magnificent historical organs that are cultural treasures of northern Europe.

Richards spoke first, providing the historical background and context for the scientific investigation of organ pipe metals. Calling the organ the instrument of instruments, Richards cited the great historical organs of the 17th and 18th centuries, with their thousands of pipes and many individual voices, as crucial sites for the exploration of the relation between materials and music, and how those relations were heard and understood in the past. To illustrate, she showed images of some of these organs, notably the pipes and the console of the organ in St. Bavo Church in Haarlem, The Netherlands, built by Christian Müller (1735-1738), and the world’s oldest (1473) playable organ at Notre Dame de Valère in Sion, Switzerland. She also included drawings from a 1619 publication, Syntagma musicum II, by Michael Praetorious, showing in great detail parts of the organ, such as the seldom-seen bellows that provide the wind for the instrument, blow-ups of the keyboard, and the various designs for pipes (flues and reeds). Sound clips demonstrated the metallic, nasal character of the reeds and the characteristic choral sound of the flues.

She also summarized the various components of the organ and how they collaborate to make the many voices that organs are known for. Specifically, regarding organ pipe metals, Richards quoted authors, historical and contemporary, on the relationship between metal and sound. For example, Girolamo Cardano in the mid-16th century wrote: “Of the metals, bronze has a large voice, brass is extremely shrill, tin is sweet, and copper can be struck with great force because it neither bends nor breaks easily. Silver has a clear voice, … tin [by which I mean white lead] is suited for organs because of its sweetness, as is bronze for tubae [straight trumpets] and brass for litui [crooked trumpets]. Iron has a bad sound…Organ pipes can also be made of bronze; and since some are of tin and others of wood, in the same organ you may hear trumpets, horns, syrinxes, tibiae [reed instruments with finger-holes], timbrels...All that is lacking is the human voice which, being sweeter than the others, is harder to imitate.”

Because the surviving antique instruments, of immense value yet in regular use, need to be restored and maintained, there is an important role for contemporary materials science in understanding the properties of historic organ-pipe metal. Oertel, part of a Swedish–American collaboration seeking to learn how the historic instruments can be preserved, took over at this point with a graphic illustration of how the great European baroque organs can suffer from atmospheric corrosion of their pipes with a photo of an organ pipe in the 1637 organ in Lübeck, Germany that had been torn apart by corrosion and lost its voice altogether. Sound clips demonstrated the degradation in sound quality of lesser but still damaging corrosion. Baroque organ pipes were typically made from lead–tin alloys, in part because organ pipes need to be flexible with significant damping in order to hold vibrating air without resonances building up. Elemental analysis showed a variety of impurities at trace-element concentrations of 0.1% or less, notably bismuth, which was often added intentionally to improve the melt behavior, while others such as antimony provided strength to prevent the pipes from sagging.

Oertel cited several causes for organ-pipe corrosion, but organic acids, acetic acid in particular, emitted from the wood of organ cases were significant corrosive agents for lead-rich pipes. The collaboration made field observations of conditions in historic organ cases as a basis for designing laboratory experiments to study the role of alloy composition and humidity in the susceptibility of pipes to organic acid attack. In short-term experiments (1 month), they found that at 95% relative humidity, acetic-acid attack on lead–tin alloys increases with increasing tin content, in contrast to observations at lower humidities. This information in itself has led to strategies, such as using different woods and providing ventilation and sensors, to keep acid release and humidity under control. Imaging FIB-milled samples revealed significant microstructures, such as tin at oxide-metal interfaces in samples grown in high humidity. Grazing-incidence x-ray analysis identified several lead-based corrosion products. X-ray diffraction of hydrothermally grown samples found basic lead acetate and basic lead formate, two- and three-dimensional compounds based on Pb4O octahedral. A resemblance to the lead-oxide structure provided a bridge to the long-term effects observed in historic organs.