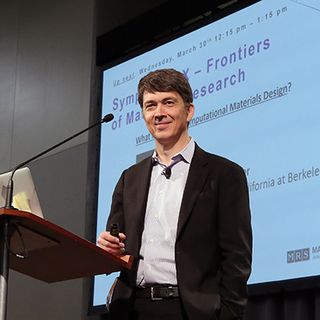 What Is Next for Computational Materials Design?

“We know nothing” were the words with which Gerbrand Ceder contronted his listeners at his Wednesday Symposium X presentation, citing the small fraction of the up to 200,000 organic compounds about which the basic properties have not been measured. While this is too many to measure or even to calculate from theory, there is hope, he added, because computational materials science is now powerful enough that it can predict many properties of materials before those materials are ever synthesized in the laboratory. The Materials Project (MP), a US Department of Energy-funded, multi-institutional collaboration launched in late 2011 and headquartered at the Lawrence Berkeley National Laboratory, aims to provide the capability to query properties for novel compounds upon request, information to be used in selecting materials for whatever application that requestor has in mind. Acknowledging that the most basic properties (analogous to genes) are not necessarily the ones useful for materials selection, Ceder said that the MP approach is to invest in basic property calculations that can be used toward obtaining multiple higher-order properties. For example, elastic tensors lead to a variety of properties including elasticity, thermal transport, dislocations, and free energy. There are now more than 66,000 compounds in the system about which there is some information and almost 17,000 users.

Crystal structure provides a good example. Given a hypothetical compound, can it be made, and if so, what is its structure? It is already possible to look at the existing library of tens of thousands of crystal structures, select a compound whose structure is known, look at the structural effect of substituting one ion for another, and use the information to calculate a map showing the probability of maintaining the structure under ion substitution. With this background, the computer has “invented” a new lithium-phosphate compound (Li9V3(P2O7)3(PO4)2) that when synthesized functioned well in a battery. But Ceder pointed to a future of predictive synthesis in which it will be possible to calculate what arbitrary compounds can be made. He cited two approaches: One data-centric that relies on published literature containing synthesis information for existing compounds and the other deductive that is theory-driven. The data-centric approach relies on the ability of the computer to scan the literature, extract the relevant synthesis information, and construct an interpretable database of synthesis recipes. This approach has already been useful in identifying patterns and connecting them to thermodynamics and kinetics in compounds like TiO2 grown by three different methods (hydrothermal, sol-gel, and solid-state).

Ceder began his discussion of the deductive, theory-based approach with the question: Is energy a good criterion for what can be made? The traditional information might be “yes,” but it turns out that metastable phases, which do not have the lowest-possible energies of the thermodynamic ground states, make up about half of all known compounds. So, which of these metastable phases can actually be made? One study of phosphides, sulfides, chlorides, oxides, fluorides, and nitrides, found that most phases (except the nitrides) had energies within 100 meV of the ground states. A further investigation of two kinds of metastability (polymorphism and phase separation) was more surprising: Among the many hypothetical low-energy polymorphs of well-studied compounds, many had never been observed, suggesting that low energy was a necessary but not sufficient criterion for what could be made. That the nitrides were outliers was traced to the stability of the nitrogen molecule. Using sputtering close to the substrate to prepare samples resulted in atomic nitrogen incident on the subject and synthesis of metastable nitride compounds, such as Sn3N4 with a spinel structure.

Looking beyond energy alone, Ceder asked the question: “Is most metastability simply the remnant of stability under some condition the material has seen during its growth?” By way of an answer, he looked at the effect of particle size and surface energy. Among the examples cited were compounds existing in two phases (ground state and polymorph) depending on conditions: TiO2 (anatase and rutile), CaCO3 (calcite and aragonite), and FeS2 (pyrite and marcasite). In the first case, the metastable rutile has a lower nucleation barrier and lower free-energy at small particle sizes than anatase, which has a lower free-energy at larger particle sizes. In the second case, it is the presence of the Mg2+ ions at concentrations greater than 2 that make aragonite preferred over calcite in seawater conditions, owing to the magnesium’s effect of increasing the calcite’s surface energy. In the last case, marcasite is preferred over pyrite at small particle sizes in acidic conditions.

Summing up, Ceder concluded that the ab initio prediction of materials properties is accelerating and one may expect a fairly complete compound genome within the decade, but what compounds can be made and how remains uncharted territory, although some metastable-materials formation can clearly be explained by carefully defining local environment (chemical potentials, size constraints).