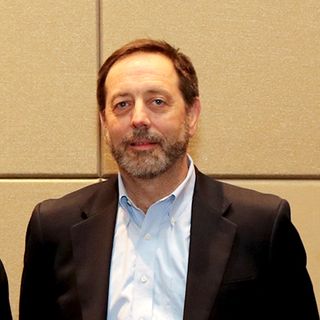 After David C. Martin’s MRS Communications Lecture, which early on referenced the appearance of bionic devices in science fiction, one listener could only think “Resistance is futile,” the warning from the Borg (human–computer hybrids), well-known to fans of Star Trek: The Next Generation. But with a twist: the bionic revolution will be of our own making, not imposed by an alien civilization dead set on galactic domination. But that’s another story. Instead, Martin’s research is about one approach—interfacing conjugated polymers to living issue—to using technology to overcome the ravaging effects of disease or injury. He began with the inspiring example of a bionic arm—hand prosthesis fitted to the shoulder of a former US Marine. Unfortunately, the cost ($250,000 each) and the limited resolution of the motion (0.25 inches) mean that widespread use of the prosthesis is not in the immediate offing. But other devices such as cochlear implants to restore hearing are increasingly common, and artificial retinas that provide limited sight are beginning to appear, though again limited by low resolution. One spin-off company, Biotectix in Richmond, CA, has a polymer-coated electrode that has been implanted in humans.

Lowering cost and improving performance are motivating the research of Martin and his colleagues. Principal road blocks to successful electrode–tissue interfaces include the familiar foreign-body reaction, along with device biofouling and eventual failure, a signal-blocking glial scar that forms around electrodes and limits electric charge transport across the interface, and the loss of proximal neurons. Functional biomaterials must have a range of properties bridging the gap between those of abiotic medical devices to biotic living tissue: Mechanical-hard to soft, bioactivity-insert to living, charge transport-electronic to ionic, surface topography-flat to articulated, and permeability-solid to wet network. Conjugated polymers are well fitted to the task. In particular, PEDOT (poly(3,4-ethylene dioxythiophene)) is attractive for interfacing between dry device materials and wet ionic tissues: It can be controllably deposited directly onto electrodes from aqueous solution; biologically active molecules can be used as counterions; it has a conjugated backbone for electron or hole transport along with cation and anion transport via exchange with dopants; it creates rough, soft surfaces that facilitate charge transport; and it is more chemically stable than other polymers.

One strategy for developing next-generation prosthetic limbs that will be directly integrated with peripheral nerves and muscles that will respond to the brain’s signals is the hybrid regenerative peripheral nerve interface (RPNI) device based on the use of an extracted piece of free muscle tissue that acts as a local target for the sprouting nerve endings. The idea is nerves do not like to be stuck with metal electrodes but are much happier with a biological connection like muscles. For example, the neurons do not continue sprouting, a painful condition called a neuroma that plagues amputees, but instead form muscle connections. One composite RPNI structure comprises the neurons, muscles cells, PEDOT on a protein matrix, PEDOT on an electrode, and a substrate. The scheme was tested in an experiment with rats on a buggy in which processed RPNI signals were routed through external electronics to a motor that drove the buggy.

In his article, Martin wrote, “It is reasonable to anticipate that amputees will soon be able to directly manipulate prosthetic devices through bionic interfaces with their efferent (motor) nerves and to extract information about the environment through interfaces to their afferent (sensory) nerves.” In his talk, Martin rapidly scanned through a wide array of recent results that collectively signal promise for making this anticipation a reality. Examples included patterning connected, nanoporous PEDOT structures and laser patterning at multiple length scales, and surface templating; approaches to answering the question “Can a nanoscale conducting polymer network be grown from electrode sites directly into brain tissue bypassing the high impedance glial scar to allow communication with surrounding healthy neurons?”; and alternative materials, such as EDOT monomers functionalized conjugated monomers for optimizing interactions with tissue and inorganic substrates. For example, P(EDOT-co-EDOT-Acid) Copolymers can control surface wetting and morphology, while P(EDOT-co-EDOTacid)-RGD can control bioactivity.

Martin concluded with a quick look at the benefits of microscopy techniques, such as the use of a FIB-SEM and TEM to image PEDOT electrodeposition and polymerization, as well as EDS for elemental mapping.

Read Martin’s article on Cambridge Journals Online and view this animation on his work.