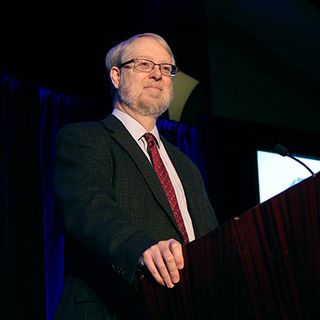 Fifty Years of Moore’s Law: Towards Fabrication at Molecular Dimensions

Christopher Ober completed the week-long series of Symposium X presentations with a look at options for continuing the so-far remarkable adherence of the microelectronics industry to Intel co-founder Gordon Moore’s famous 1965 prediction that the number of transistors on a chip would roughly double every two years. Currently the state-of-the-art is 1.3 trillion transistors with 14-nm features. The projection photolithography process used to generate microchip circuit patterns now touches many areas of science beyond electronics, such as biology and the life sciences.

Two of the key aspects of photolithography are the source, currently a 193-nn argon fluoride laser, and the photoresist that is exposed by the laser shining through a mask with the desired pattern. Ober began with a discussion of current photoresists that change from being oil- to water-soluble when exposed, involving a process called chemical amplification because it so efficiently uses a single photon to drive many reactions. Structures made in this way today are the size of the machinery in living cells, but diffusion of protons generated in the resist during exposure is one factor limiting the resolution of the pattern.

To keep Moore’s Law intact and to approach molecular-scale pattern formation, Ober said, researchers are rethinking every aspect of the patterning process. The first serious alternative, directed self-assembly (DSA) puts lithography aside and instead harnesses the phase-separation behavior of block copolymers to create patterns defined by the nanostructure of the polymer. Ideal copolymers strongly phase separate and combine cleavable and crosslinkable blocks, such as polystyrene–polydmethlysiloxane (PS–PDMS), and photoactive compounds. While these can be used as photoresists, a technique called mixed solvent vapor annealing generates a variety of much higher-resolution self-assembled patterns from phase-separated block copolymer systems, but the kinetics are too slow for commercial processes. Laser spike annealing in which a PS–PDMS-coated wafer moves under a focused laser beam can drive directed self-assembly in about 10 ms. While there is progress toward making semiconductor patterns, the inability to make arbitrary patterns can be a disadvantage.

Extreme ultraviolet (EUV) lithography enables the production of arbitrary patterns at similar length scales. The process is similar to conventional projection photolithography except for the much shorter wavelength (currently expected to be 13.5 nm), the vacuum environment required, the need for reflective rather than refractive optics to avoid damage due to the high absorption at EUV wavelengths, and the need for new resists. At this short wavelength, absorption in the resist is at the atomic rather than the functional level, and usual resists are transparent. Ober described the possibility of a resist based on hybrid nanoparticles comprising metal (halfnium, zirconium, titanium, for example) oxide cores coated with carboxyl acid ligands. The metal oxide cores absorb the EUV light, the ligands enhance solubility, and the cores transfer the energy to the photoactive compounds in the resist. Chemical amplification is not involved in the patterning mechanism. Ober concluded that between directed self-assembly and EUV resists, Moore’s Law is safe for the next few years.

Chemical amplification is not dead, however. Ober observed that organic electronics do not currently require the ultrahigh resolution of the integrated-circuit industry. For these materials, resists with aqueous base “orthogonal” solvents, in contrast to the usual resist solvents, such as hydroxylic or non-polar organic solvents, provide a way to fabricate flexible, organic electronic and photonic devices employing chemically benign, environmentally-friendly process solvents. In a patterning demonstration experiment at a Cornell spin-off company with red, green, and blue light organic emitting diodes, the resolution exceeded that of commercial smart-phone displays and exhibited a longer lifetime.

Another instance of the usefulness of chemical amplifications is what Ober called vanishing or transient electronics, which function for a fixed time before dissolving. One application would be a network of disposable sensors to monitor toxic spills. To accomplish the disappearing act, a substrate containing arrays of cells, one type with rubidium spheres in a polymer and the other with packets of sodium hydrofluoride salt. When a valve that lets in air is opened, the rubidium oxidizes, releasing heat. The salt decomposes, releasing hydrofluoric acid that etches the electronics. Finally, the electronics and the substrate vaporize, leaving a thin-film nitride and salt residue, all in about one minute. Experiments with a polycarbonate polymer have demonstrated polymer evaporation.

Concluding his talk, Ober discussed the use of the laser annealing with block copolymers to give new life to chemically amplified systems by enhancing image formation. Experiments comparing hot-plate and laser heating of lithographically produced patterns indicated the latter enhances the quality of the pattern and uses less energy than the former, depending on the resist details, in particular the “leaving groups” they contain.