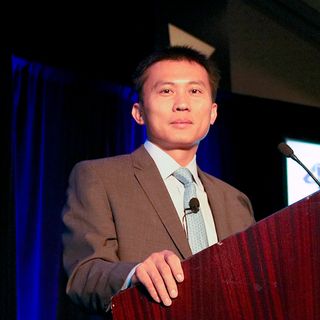 Nanomaterials Design for Energy and Environment

Written by Ashley A. White

Sustainable energy generation, efficiency, and environmental protection are the defining goals for the research of Yi Cui, who is celebrating his 10th year as a professor at Stanford University. His tools for simultaneously meeting these aims are nanomaterials.

Cui began his talk with an overview of progress in nanomaterial-based solutions to energy and environmental problems. Over the last 30 years, scientists have developed a wide range of nano- and microscale structures, and now have the ability to control size, shape, and pore distribution, composition, chemical function, heterostructure, assembly, and an array of properties. Cui cited these achievements as the foundations for tackling energy and environmental challenges—a toolkit which he uses and has developed further, looking first to the technology to identify a critical capability gap, then determining whether a materials solution can address it.

Cui focused his talk on his advancements in high-energy batteries through nanomaterial design. Next-generation batteries will need high energy density, long cycle and calendar life, good safety, fast charging rates, and low cost. For Cui, high energy density is the most critical parameter, as it can serve as a gateway to addressing the other aspects.

When Cui began his work in batteries, he determined that a fundamental paradigm shift in battery material design was needed to significantly increase energy density, and he believed the answer lay in silicon. Silicon anodes offer 11 times the specific capacity of the graphite used today, but taking advantage of that capacity means accommodating a 400% volume change as the battery charges and discharges. To successfully use silicon, he would need to understand the mechanisms of volume expansion, avoid fracturing the electrode crystal, build a stable solid-electrolyte interphase (SEI), and enable stability at the whole electrode level. Cui walked the audience through what he called the 10 generations of silicon anode design that have addressed those challenges and defined his research for nearly a decade.

Cui’s earliest approaches focused on growing silicon nanowires, which allowed electrons to travel efficiently and prevented fracturing due to the small diameter of the wires, which enable easy strain relaxation. He also used the nanowires to study the anisotropic expansion properties of crystalline silicon. Generation-four approaches employed a double-walled hollow structure composed of a silicon nanotube surrounded by an ion-permeable silicon oxide shell to improve the stability of the SEI and minimize degradation of the mechanical integrity of the silicon electrode as it expands and contracts through repeated cycling. Cui’s research showed that this structure could survive over 6,000 charge-discharge cycles while retaining 85% of its initial capacity.

Generation-eight earned Cui and his colleagues a Nature Nanotechnology cover in 2014 for what he calls “pomegranate-like” anode structures. These architectures are composed of single silicon nanoparticles encapsulated by a conductive carbon layer that leaves enough room to accommodate volume changes. An ensemble of the coated nanoparticles is then blanketed by a thicker carbon layer that acts as an electrolyte barrier, resulting in a stable SEI and superior cyclability.

One of the most interesting aspects of Cui’s talk was his work on sourcing silicon. Oftentimes materials scientists focus on optimizing devices for performance, leaving aspects like material sourcing and cost to someone else to sort out. Cui, however, has investigated low cost, renewable sources for the silicon needed for his batteries, looking to rice husks and the 500,000 kilograms per year of discarded crab shells, which also offer a natural template for nanochannel arrays. In 2008, Cui founded a company called Amprius to commercialize his silicon anode technology, and he currently has technologies in production that are based on his first- and second-generation approaches.

Although Cui has focused his efforts on silicon thus far, he is already looking beyond silicon to other battery materials, including lithium metal anodes—the so-called “holy grail” of anode design, sulfur cathodes, and black phosphorus cathodes, and he has developed nanomaterials for other applications, including a transparent air filter that can trap more than 10 times its own weigh in particulate matter.